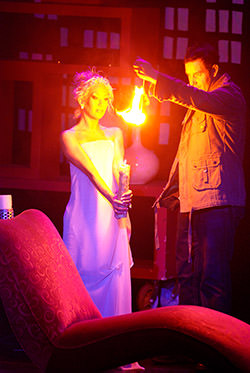 Having achieved fame with his unforgettable magic on television, Illusionist Steve Wyrick is a Las Vegas icon and headline entertainer who has performed for kings, queens, princes, princesses, presidents, and even the Sultan of Brunei. Steve’s televised network appearances include The Ellen DeGeneres Show on CBS, The Late Show with David Letterman on CBS, A&E network’s Shipping Wars,, TLC network’s American Chopper, The History Channel’s That’s Impossible, VH1’s Celebracadabra, NBC’s The World’s Greatest Magic, E! Entertainment’s Talk Soup, NBC’s The World’s Most Dangerous Magic, HGTV’s Offbeat America, and ABC’s The Champions of Magic from Monaco, hosted by Princess Stephanie and Lorenzo Lamas. In the latter, Steve premiered the “Blades of Death Challenge,” a deadly race against time that TV Guide called “unparalleled.” One of his most recent television appearances was on the 17th Annual Hooters International Swimsuit Pageant on Fox Sports 1 network. He also performed an epic vanish for the Ancient Aliens TV series on the History and H2 networks in October 2013. 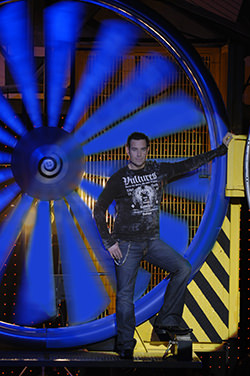 Some of Steve Wyrick’s greatest illusions include appearing an AS350 helicopter; appearing a Lear Jet 35; stepping through the spinning blades of a 747 turbine jet engine going Mach 1, and making a Hummer H2 invisible while 40 spectators created a human barricade surrounding the vehicle. Recently, on the 17th Annual Hooters International Swimsuit Pageant, Steve created an original multimedia illusion in which he took “sawing a woman in half” to new technological levels. For the first time in the history of magic, the separated body parts (head and torso and legs and feet) could be examined up close by an audience member. Audrina Patridge, star of MTV’s The Hills and NBC’s First Look, checked out the body parts and could not believe what she was seeing. For the ultimate finale to the illusion, Steve reassembled the girl and virtually morphed her clothing into the Hooters iconic uniform. 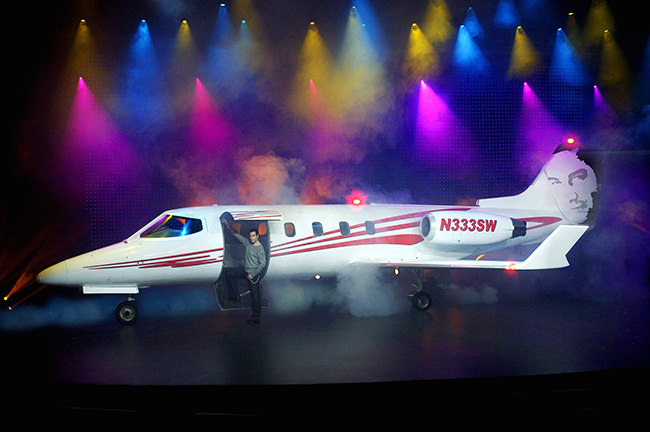 Steve appeared on an episode of A&E Network’s Shipping Wars and performed an illusion for the show’s star, Marc Springer. Marc inspected a crate after which Steve stepped into it and levitated himself and the crate a few feet off the ground. The real magic of the episode was getting Steve’s massive 747 turbine jet engine from Las Vegas to Atlantic City in time for his premiere performance at the Golden Nugget. 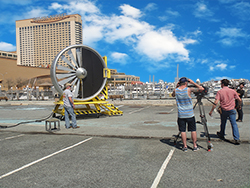 Throughout the years, Steve Wyrick has won many awards in magic, including the International Brotherhood of Magicians and the Society of American Magicians. More recently, the International Magician’s Society, the largest magic organization in the world, bestowed on him the Merlin Award for “Magician of the Year.” Steve was honored to be invited by President Clinton to do a command performance at the White House where he premiered some of his newest illusions for the President and First Lady.

Steve Wyrick performed all over the world, from Japan to Monte Carlo, before opening a permanent show in Las Vegas. Having headlined more than 5,000 shows in the famed tourist destination, over the years, Steve has grown into one of its hottest stars, with his image being displayed in two feature films — The Cooler, distributed in 2003 by Lionsgate Pictures, and 2009’s Race to Witch Mountain, distributed by Walt Disney Pictures.

Steve Wyrick was able to accomplish what no other magician in Las Vegas history had been able to achieve – he closed down the world-famous Las Vegas Strip not once but twice, on two separate occasions, for illusions filmed for television. The first was for American Chopper on the TLC network. The Teutuls of Orange County Choppers built Steve a new bike to commemorate his 1,000th show at Planet Hollywood Resort and Casino and it was presented to him on the Las Vegas Strip in the largest and most creative bike reveal ever for their show.

The second illusion was filmed for Ford Motor Company. Steve partnered with world-famous drifter Vaughn Gittin, Jr. and created a stunt that shut down The Strip entirely in both directions for a mile. Thousands of Las Vegas tourists watched from behind sidewalk barricades as Steve performed one of the most dangerous challenges ever staged in the history of Las Vegas. The stunt was broadcast on Ford.com , Spike Tv.com and aired on “The 10 Unleashed” series of webisodes that also featured Queen Latifah.

Steve Wyrick is a celebrity magician, global magic icon, TV personality, author, daredevil, and a celebrity judge. His youthful passion having become a reality, he has been featured on the History channel as an expert on invisibility and magic technology and has become one of the most dominant forces in magic.